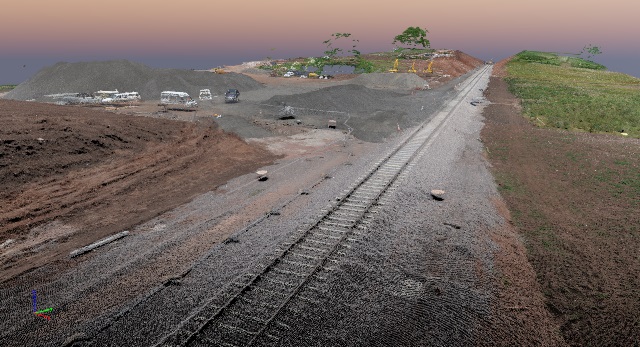 The Staffordshire Alliance was a joint venture by several companies to provide 6 miles of new railway as part of an area improvement project for the rail industry. The project included major structure, road, footpath and utility diversions and improvements as well as major earthworks.

The client required Digital Terrain and Digital Elevation models constructed from photogrammetry data at 1 m grid point spacing at 1cm resolution or greater to provide accuracies of +-10mm in plan and +- 20mm in height or better to underpin construction and as built plans.

For this project, Remote Aerial Surveys undertook a topographical survey of a new railway construction with 1m spot heights. In addition RAS produced a 3D animation and volumetric analysis of a stockpile on the site as part of the work. In all the output from the data (photos & video) captured by RAS Video resulted in:

One of the major challenges of the work for RAS was working between heavy earthworks/construction and a busy train schedule. In addition the client required incredibly high resolution topographical data (+/- 10mm accuracy)

The work required meticulous planning with safety paramount with a need to not only to adhere to legislation and worksite rules but also to gain the correct amount of overlap to get the accuracy. Neither of these elements could be compromised.

RAS was able to demonstrate its experience of working on large construction projects involving multiple contactors with very exacting requirements.