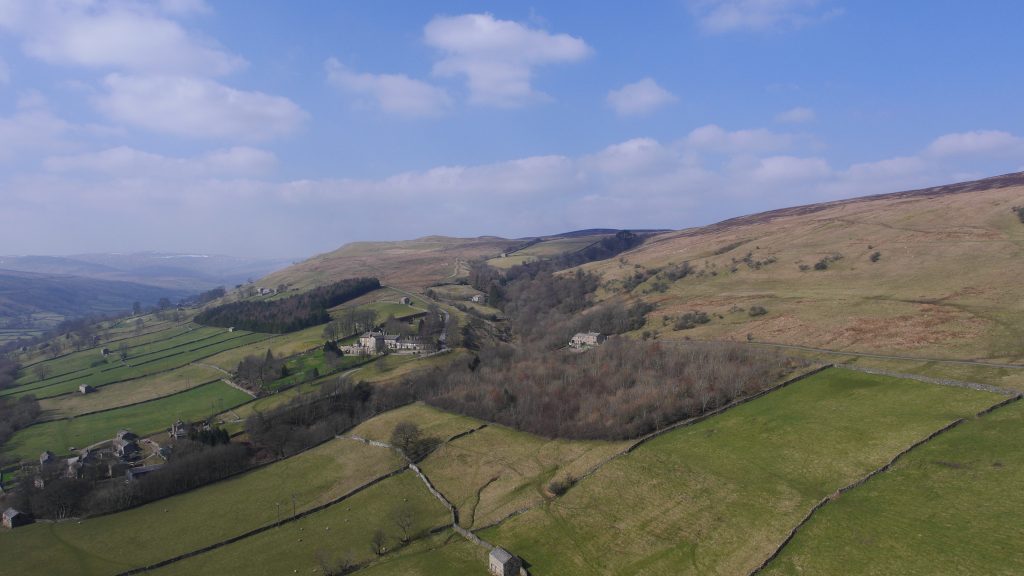 Morrison Utility Services were engaged by Yorkshire Water as part of the AMP 6 programme to investigate and design a new pipeline in Swaledale, part of the Yorkshire Dales National Park.They required a pre-condition survey for the proposed pipeline route in the West Stonesdale area. Having seen the ability and benefits of using UAV’s for ground surveying in a demo last year, Morrison requested Remote Aerial Surveys to fully complete the survey.

As part of this process, Morrison required a ‘pre conditioning survey’ prior to the works taking place. Traditionally, this is done through ground surveys, where a team travel along the route by foot to document land and asset condition.  This is a costly and time consuming process in itself, but challenging terrain and accessibility make it even more so. Previously such a survey would have taken 6 weeks to complete where as using a UAV enabled the survey to be completed in 4 days.

The project presented a number of difficulties not least of which was investigating a large amount of private land. Historically engaging with private land owners had proved a drawn out and painstaking process involving lengthy negotiations.

Furthermore the planned route had a number of specific engineering issues including four crossings of the River Swale and 13 crossings of other water courses,not to mention numerous drystone walls and areas of steep terrain.  Morrison felt that there must be an easier way to collect the data they needed, without the time and cost of ground based surveys. None of the challenging areas could be viewed by other means such as Google Earth, due to its poor image quality nor could they be reached from highways which were too far away, so the UAV proved an essential tool.

Not only could Remote Aerial Surveys complete the task but we were able to provide the client with higher resolution images than they had seen before from traditional aerial surveys.

The pre-condition survey was primarily required as an evidence base for Morrison and Yorkshire Water, to protect in part against future claims for disturbing the landscape. To achieve this, Remote Aerial Surveys calculated that a georeferenced, photogrammetry style, 2D photo-stitch would best suit the requirement. This output data is viewable in GIS software or as a Google map tiles format and allows the customer to narrow their search on a larger scale and then use the raw image to focus on details.

The client supplied land notices along the entire route advising the local population of the intended work and it was their responsibility to prove landowner permission should it be requested. This approach ensured that any public anxiety over the use of UAVs was dealt with before work commenced.

The work was specified for a 2 week window to ensure optimum weather conditions. All work was undertaken in accordance with the company’s strict operations manual to ensure health and safety procedures were adhered to. The client was able to attend site and observe the survey in progress.

Morrison required high resolution photography of the entire length of the pipeline route. In just 4 days, 20GB worth of 16mm per pixel photography was collected and stitched into a 2D map. The latter being viewable in Google Earth, allowing seamless viewing of the entire pipeline route. The datasets extracted include terrain slope details, aspect & ruggedness grids which have proved very useful for visualising and analysing the physical landscape.

In summary the client was able to receive:

Now that the flight plans have been programmed they can be repeated any number of times, enabling the quantifying of processes such as creep and landslides. Importantly capturing data and images before the pipeline is built ensures that accurate records are available post project completion so that the full impact of the landscape can be assessed. This is especially important in this National Park area but is obviously of major concern to landowners and farmers whose estates may be affected.

Using UAVs provided the client with a number of considerable advantages over previous similar work. It was established that the UAV technology provided by Remote Aerial Surveys played an extremely influential and beneficial role and could be used in projects of a similar size, scale and nature. The client now sees strong potential for using UAVs during the investigation and design processes across the full spectrum of utility infrastructure schemes.