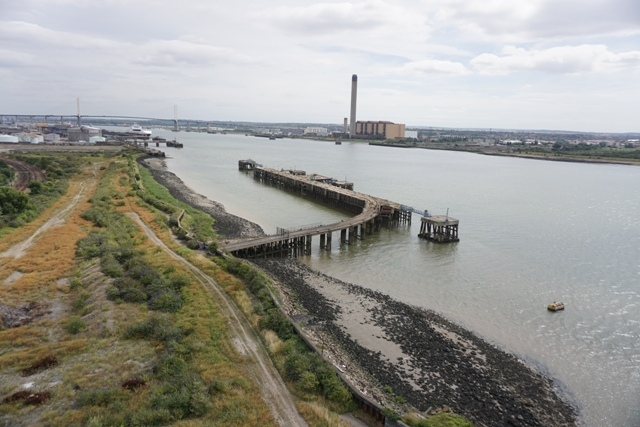 We were asked to assist surveyors Plowman Craven with a topographical survey of a 15 ha development site in Purfleet, East London.

The site was of mixed terrain including some scrub land, a 1km long foreshore and also some inaccessible piers; the latter 2 elements would be especially challenging for conventional surveying techniques. The foreshore was tidal which meant it could only be surveyed during a 2 hour window; added to this there was a 20 foot drop onto the foreshore over the flood wall which meant for a surveyor on foot it was very unsafe and difficult to get to. A UAV survey was therefore the ideal tool for the job and as a specialist operator Remote Aerial Surveys were able to provide an experienced team for the work.

Some 20, ground control points were set out strategically across the site to make sure that an accurate model was generated. It was also necessary to carry out some total station work was also required to pick out some points on the piers to control those areas during the processing stages. With careful planning and set up we were able to collect all the necessary data in just 4 flights which equated to around 40 minutes of actual flight time. Accurate planning was essential to take into account tide times which meant that we carried out the work around the low tide point to make sure that as much of the shoreline as possible was revealed. In all around 650 overlapping images were collected in order to later build the necessary level of detail into the model.

The next steps involved processing the data to build a 3D model & point cloud using photogrammetry software. The data from the point cloud was then used by the clients BIM team to extract the 3D CAD drawings.

Aside from the risks to personnel associated with the foreshore, Plowman Craven estimated that it would have taken their land surveyors around 7 days to complete the same collection of survey data using traditional techniques. Using our UAV survey capabilities enabled a safer and faster survey to be completed. By capturing the data in this way there is also the added value element for the client of having an up-to-date aerial photo-mosaic of the site which will help with planning the works on the site.