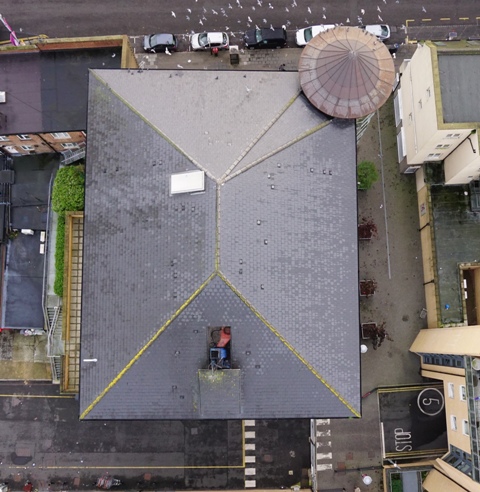 Barratt London approached Remote Aerial Surveys to assist them in inspecting multiple roofs within a congested shopping centre in Feltham. Barratt had been involved in the construction of the residential/commercial property centre and as part of their guarantee they had noticed some damage to one of the roofs on the complex. They were obliged to inspect it as a warranty procedure. Barratt wanted to ensure that the structures had been built to specification and that the damage was therefore due to high winds and weather conditions.

They identified that using UAVs would bring efficiency and safety benefits over conventional methods. Previously, similar inspections required scaffolding to be built around the buildings at great cost, considerable disruption and with an inherent safety risk. They rightly concluded that using a UAV should be a much less disruptive, safer and more efficient method. This was the first time they had employed this method.

The purpose of the inspection was to assess and document the condition of the roofs for maintenance or repair. More specifically Barratt London identified tile slippage on one of the residential buildings within The Centre Shopping Centre in Feltham. They needed to inspect this area more closely with the information aiding them in finding a solution to fix the issue. It was their experience that it would be prudent to inspect the other roofs of similar manufacture to check for similar damage or issues.

We conducted a site visit to confirm that, given the congested nature of the building, these roofs could be inspected using UAVs.

Having assessed the site for safety, the work was a relatively straightforward roof inspection however it was a very congested area, with lots of residential and commercial properties; additionally it was very close to Heathrow with the take-off and landing area being an actively used car park.

Close liaison with the centre management was essential with the car park being cordoned off the night before to ensure operationally legal distances from vehicles not under our control. The work was timed to take place early on a Sunday morning to ensure that the number of persons on site was minimised albeit that we had to ensure the flight didn’t take place too early so as not to disturb the residents.  An optimal time was chosen (7-11 am) and with operational efficiencies, the work was able to be completed before the shopping centre opened to the public.

The take-off and landing areas were selected and designed such that the public was kept a suitable distance away from the UAV during take-off and landing and the flights planned such that the UAV never passed directly overhead of any persons at any height. The CAA have stated that as long as a UAV operator has permission of the building owner to fly within 50m of their building, there is no need to also get permission of the persons inside that building. For this reason, it was essential that we were given written permission from all building owners to allow us to fly within 50m of the building.

The data was all collected during a single morning’s flying, with the images geotagged and ordered so that it was easy to access and actually use the data once it was sent. The data consisted primarily of still photographs of the roofs with areas highlighted to document the state of repair.

The client, Barratt, were pleased withthe survey results and have stated they would like to use us again on other projects. Additionally the Centre Management at Feltham are also likely to utilise our services to survey the rest of the centre as part of their regular inspections.