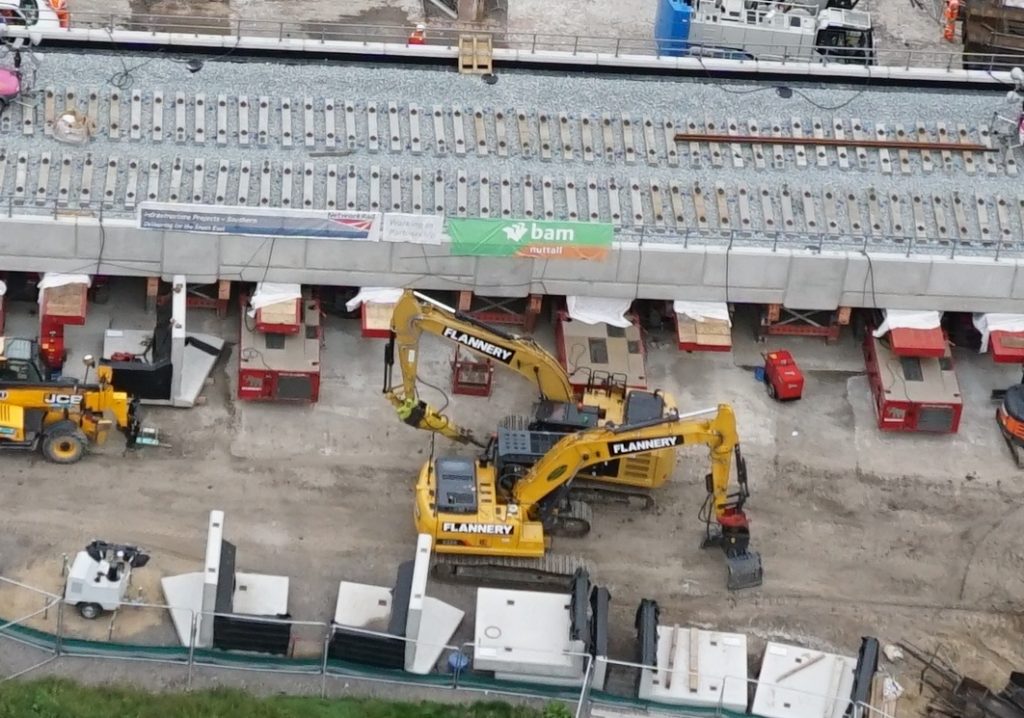 Bam Nuttall were engaged by Network Rail as part of their bridge maintenance project. Network Rail were assessing all their bridges for repairs and as part of that process selected a bridge east of Bury in West Sussex for replacement. Bam Nuttall identified this project as a great opportunity to use progress photography to promote their business and workmanship. As they wanted something more innovative than on previous projects they reached out for Remote Aerial Surveys as we had been recommended to them by their client, Network Rail. Bam Nuttall wanted to work with a company that could offer good coverage of the project and since obtaining UAV imagery in this way is a relatively new industry they wanted a supplier who was of sufficient size to meet their own high supplier standards and offer them a good quality, reliable service over the life of the project.

Bam Nuttall specifically wanted oblique aerial photography and video which would show the build progression. Using a UAV offered them a unique perspective not only giving a bird’s eye view of the whole project but enabling images to be captured without endangering personnel or interfering with the ongoing project. On previous projects ground based photography had been used which hadn’t been able to cover an entire project in one photo. Previous imagery had been far less effect in conveying the scale of the projects and the level of achievement by the teams involved. The only other way to achieve an aerial view like this would have been to use a helicopter, but even for a large company, the cost would have been prohibitive and difficult to justify.

Although the nature of the site was essentially an uncongested area making flying over it relatively easy, for safety reasons workers on the site were required to be under the control of the team during the flights. This essentially required them to be made aware of the operation and what they could expect to see before the start of flying. They were also asked to follow any reasonable instruction given to them should that have been required. The company liaised with Network Rail to ensure they were aware of the operation. As a framework supplier to Network Rail there were no issues with this and we had already factored in the restriction not to operate closer than 50m to the railway to ensure compliance with their PfAW.

Using a UAV enabled a wide variety of different angles to be captured not only of the site itself, but also the roads leading up to the site and the additional works that had been required just to get access to the project e.g. rerouting watercourses.

We were able to provide a large number of images with all of the deliverables being sent via a digital storage device to Bam Nuttall upon completion.  As this was an assignment to capture the build progress a number of repeat visits were made to the site during the course of the build. Each outing comprised a day of photography followed by processing time of the images ensuring that Bam Nuttall had a quick turnaround of all the information.

The final outcome was a series of images which were stitched together to show the time lapse over the life of the build. Accompanying video of the whole site also provided a stunning perspective on this key project with the end result exceeding the client expectations.