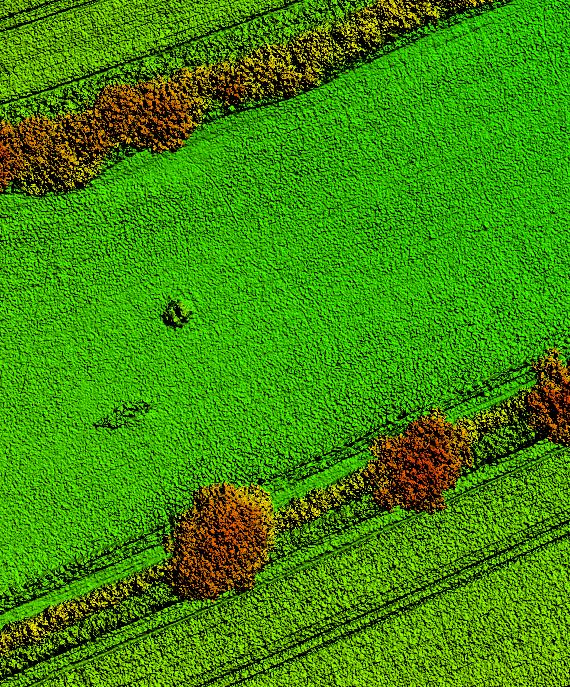 A DEM (Digital Elevation Model) is a 3D representation of a ground surface. This type of data has infinite uses, particularly in 3D modelling, and can be used to derive a wide variety of information about the environment, including flow direction and accumulation, terrain ruggedness and slope.

There are two primary subtypes of DEM which are;

Other deliverable formats may be available upon request.

DEMs can be created from a variety of data sources which vary in accuracy, resolution and cost. Some common data sources include:

This technique involves shooting a laser beam from an aerial platform and measuring the time it takes to reflect back to the sensor. LiDAR typically produces very high resolution, accurate results but has very high associated costs.

Similarly to LiDAR, SAR measures the time taken for a pulse of radar to return to the sensor after reflecting off the earth’s surface.

We create DEMs using aerial photographs using the process of Photogrammetry. Our UAVs are equipped with high resolution professional grade digital cameras and are able to fly at low altitudes (up to a maximum of 120m). This means that we are able produce photographs at a far higher resolution than can typically be achieved with traditional aircraft based aerial surveys. These detailed images can be used to create high resolution DEM’s that outclass those produced using photogrammetry using traditional aircraft, in terms of both resolution and accuracy. 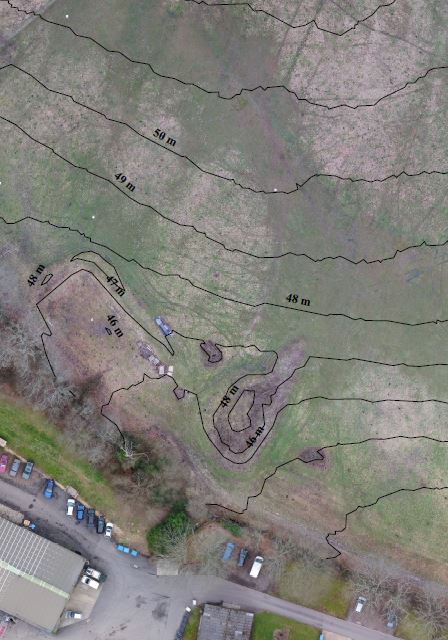 Photogrammetry derived DEMs rely on a series of photographs taken over the target site or object. It requires areas to be observed from two different viewpoints so that measurements can be calculated. In principle it is similar to our depth perception where we see the same object from each eye and as a result we can judge the distance.

For the process to work correctly there must be overlaps between the images both in the direction of flight (known as end lap) and between adjacent flight lines (known as side lap) the amount of overlap depends upon the variation in terrain and specific job requirements in terms of accuracy and flight time. Typically it requires a minimum of 60% end lap and 30% side lap, if required these can be increased to 90%.

As the aircraft flies its preprogramed route GPS is used to control the flight path, altitude and image capture. This ensures that the correct overlaps are acquired between photographs and that there are no gaps in the resulting imagery.

Additionally an IMU (Inertial Measurement Unit) stores data about the UAV’s roll, pitch and yaw whilst in flight. This allows us to make corrections to any distortions these might cause the image. In addition, our sophisticated camera mounts automatically compensate for these changes to the UAV’s position, minimising their impact.

Prior to flight a series of identifiable targets are placed within the survey area and, if possible, features that are easily defined from the area are identified (ie. road markings at junctions). These are known as ground control points (GCPs). These are surveyed using GPS or total station to capture the precise XYZ location.

Once data capture is complete the images are processed, incorporating the following steps.

Additional products that can be acquired using the same data include seamless aerial mosaics, orthorectified aerial images (in which distortion caused by changes in elevation is corrected) , point cloud elevation model, cross sections/long sections and contours.

At each site where a DEM is created a ground truth survey is undertaken to determine the accuracy of the model. The accuracy of the DEM’s created by RAS can be as good as ±30mm RMSE, depending on the terrain. This accuracy can be achieved using an RTK GPS with ground targets. RAS can alter the GSD (ground sample distance – the distance on the ground covered by one pixel) of the DEMs we produce to suit the client’s needs by altering our flying heights.